Year 8 had an opportunity to see a colossal new exhibition of more than 300 of Picasso’s works at the Royal Academy.

This is what our students said about the trip.

“The art trip was really enjoyable and fun because we got a chance to see a variety of Pablo Picasso’s artwork. We learnt interesting information and meanings behind Picasso’s paintings from when he was young and old.

During the trip, I had three paintings in mind.

There was one outstanding picture by Picasso  Femmes à leur toilette, the way Picasso showed the story in the picture is one of a kind, that's why this is my favourite picture.

The picture of the violin made out of pieces of paper, its wonderful how someone can come up with this but at the same time it’s just simple.

Lastly the seated woman, it’s a colourful painting but in a way it’s too weird, the way the picture is painted it’s too hard to identify what the features are and what it is meant to represent. Also the colours weren't really blending with each other, they didn't work out properly. That is why the seated woman was the ugliest painting for me.”

“First, we were very excited in the morning to go to the exhibition. When we got to London Victoria, we visited many places on the way to the Royal Academy and took so many photos. As we walked we saw Buckingham Palace and we spent 10 minutes taking photos of the Palace, the Victoria Memorial and the beautiful black and gold gates. When we got to the Royal Academy we were 30 minutes early for our slot and took a group photo.

Outside the Academy, there was a statue of the first president holding a pencil and paper. Inside it was beautiful, even the ceiling had beautiful paintings and there were tapestries everywhere. We went into a gallery and it had quite a few paintings, we saw the last supper. It was amazing how big it was. 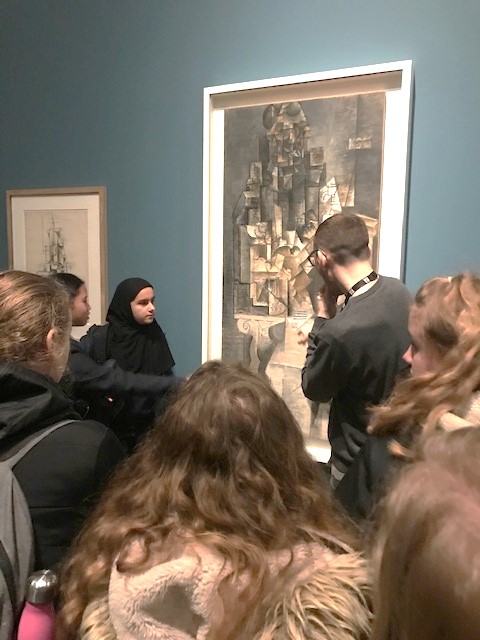 Then we left the gallery and moved onto the exhibition. We had a tour guide called Jake, he was very good and he taught us a lot. He told us a lot about Picasso's art and how it changed over the years. We saw one of Picasso’s first pieces, it was a cut out of a dove which is the symbol of peace and a Scottie dog. He cut this out of paper at 4 years old, then at 12 he could already draw a person's back torso. At first he was just like a generic artist, but later in his career he changed his art style with the different art movements.

In his younger life he didn’t have enough money to buy an etching plate, so he used his friend’s old one. He scraped off the old etchings and created his own, it was his first time etching but it looked amazing. Then we moved on to Cubism and we looked at his painting of man with guitar. We looked at how many parts we could make out as being real things, such as pieces of a guitar; we also noticed some music notes on the side and a few fragmented letters.

We moved on to an art piece that he made using a collage technique. It was a painting of three women in a living room. Finally, we saw two pieces he created, one looked like a draft and the other was a lino by reduction piece. It was a very fun trip.”